1986 marked the beginning of Servicio Postal de Exposiciones, Múltiples y Propaganda (Postal Service for Exhibitions, Multiples and Propaganda), which would later function through the channels of the Galeria Nacional and the GENE group, of which Saiz was a founder that year. The Servicio EMP, according to the editorial in Mailing ‘0’, «is a producer of Multiples distributed by mail and by six month subscription. The number of mailings and how often they're published is random ( ... ) it is open to all suggestions, and the type of work it may produce is unforeseeable ( ... ) it is an unorthodox magazine in which the pages and the articles, are received one by one, and separate from the photographs ( ... ) it is a gallery that in each mailing enters the spectator's house, rather than vice versa . The Servicio Postal de Exposiciones, Multiples y Propaganda is a reinforcement of artistic opposition.» It was a time of open aesthetic combat.

Both in the first era of the mailings, when Manuel Saiz was in charge of them, as well as in the second, when GENE took over, Servicio Postal was an unusually active endeavour. Pedro Roldán, Julio Jara, Pamen Pereria and Jose Díaz Cuyás formed, with Saiz, the nucleus of the instigators. At one time, all of them formed part of the GENE group, based around an alternative space, the Galeria Nacional, with Saiz one of the guiding forces. But far from accepting his role as a pivotal point in group experiences, he reiterates that GENE had its own voice, and not a very comforting one at that. The catalogue for the 1987 group show Punto (Point), with some of the most representative members of the group participating (Colis, Jara, Roldán, Saiz), summed up the program: «GENE is redefined in each new act · the politics of the cave man interests us and the religion of the contemporary artist · we are in favour than against unemployment benefits · we are cruel we doing art politics and not the art of politics · is not a language / do not translate · every act is religious political artistic · the bacon sweet is the speed · toward an art without spectators · as we have said the actual euphoria of the painting hides an artificial and mediocre reality financed by a paternalistic administration · the systemized speed our acts being sheltered in the effectiveness and in the false myth of progress · freedom only exists in the struggle for radical · liberty is transparent · the truth is revolutionary · an individual utopia for a revolution · unconscious revolution for the multiple use of single use objects · it is not that all is made it is that it is always happening · art is a process and not a result · art is an individual activity that takes on meaning in social · Life fashion is a social function that searches for individual meaning · there is no history there is an enormous digestive device · the most interesting thing about Pablo Picasso is Ruiz · time is useless if you cannot waste · it only nothingness is inserted in that which has no cracks · art has no other enemies than the ignorant · the artist is not the lord of art but rather the servant · the abyss is the unit · GENE is useless." A long epistle where Dada influence is easily perceptible, as well as maxims that are directly attributable to Manuel Saiz. 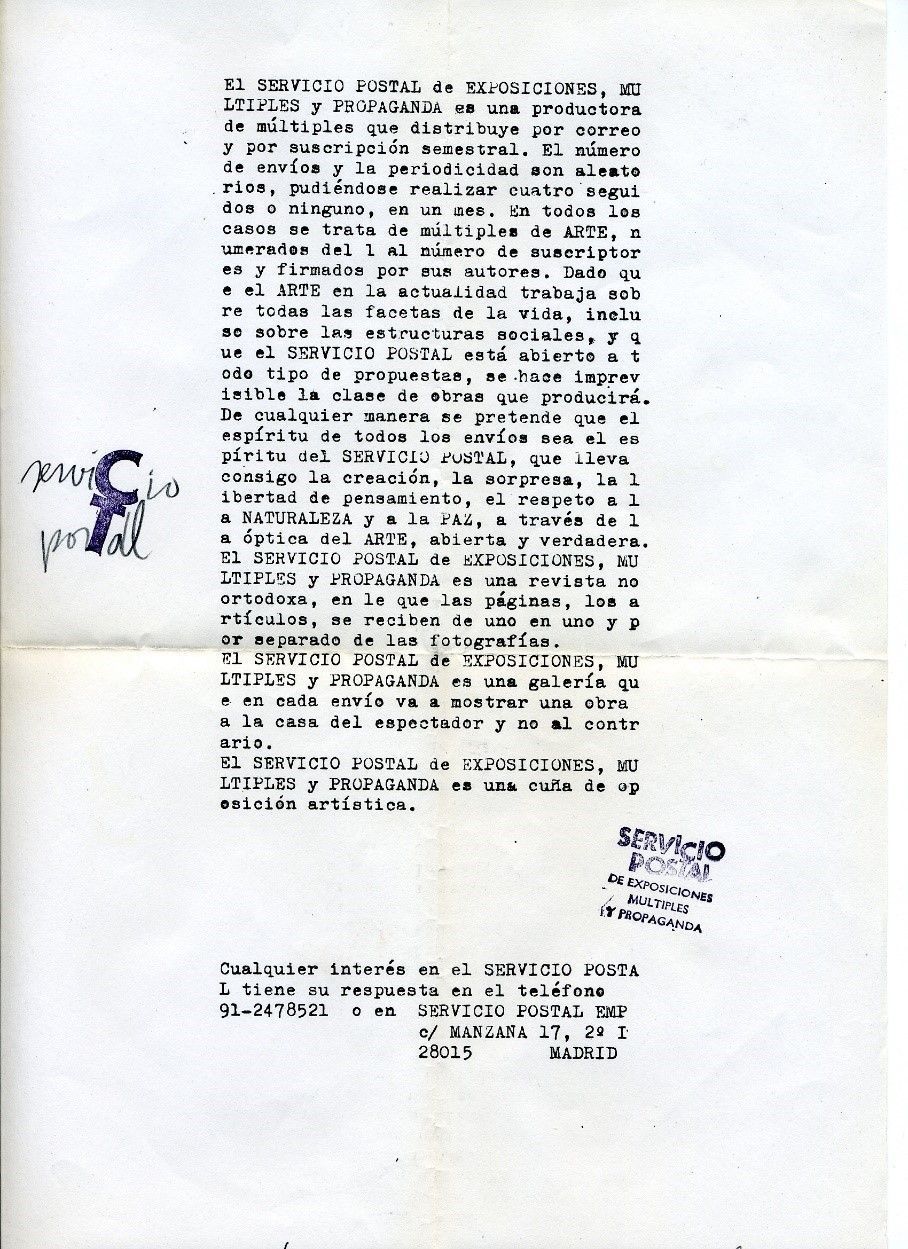 I had started the Servicio Postal de Exposiciones Mútiples y Propaganda on my own in 1986, as a vehicle for art and political ideas to be distributed. This is the original description of the service. 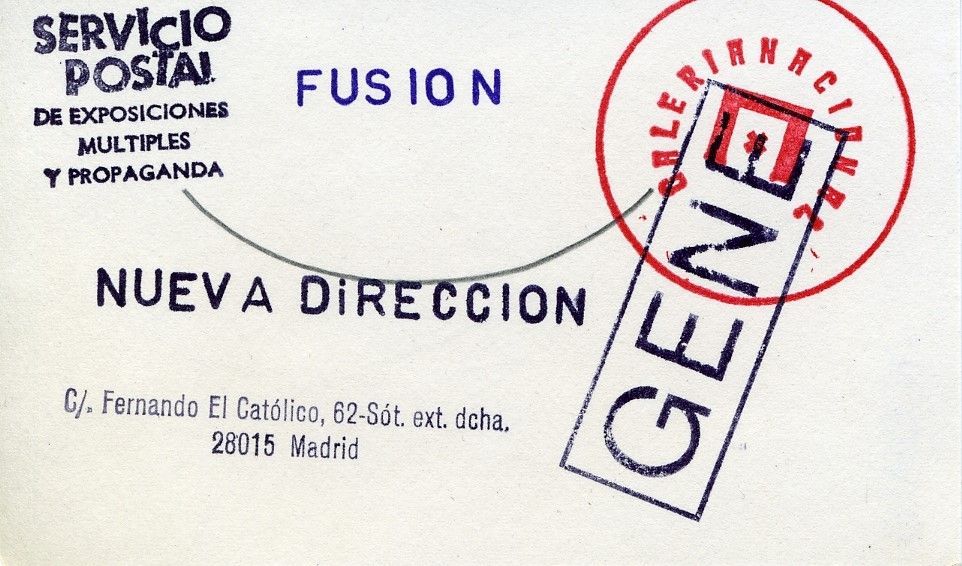 The message about the merge and the new group.

When I had sent about 30 messages created for different people, I got in contact with Celia García Bravo and Pedro Roldán, who were running the Galería Nacional, a space for art activity. We decided to merge our activities into GENE, a gallery, a postal service and a group of art actions. 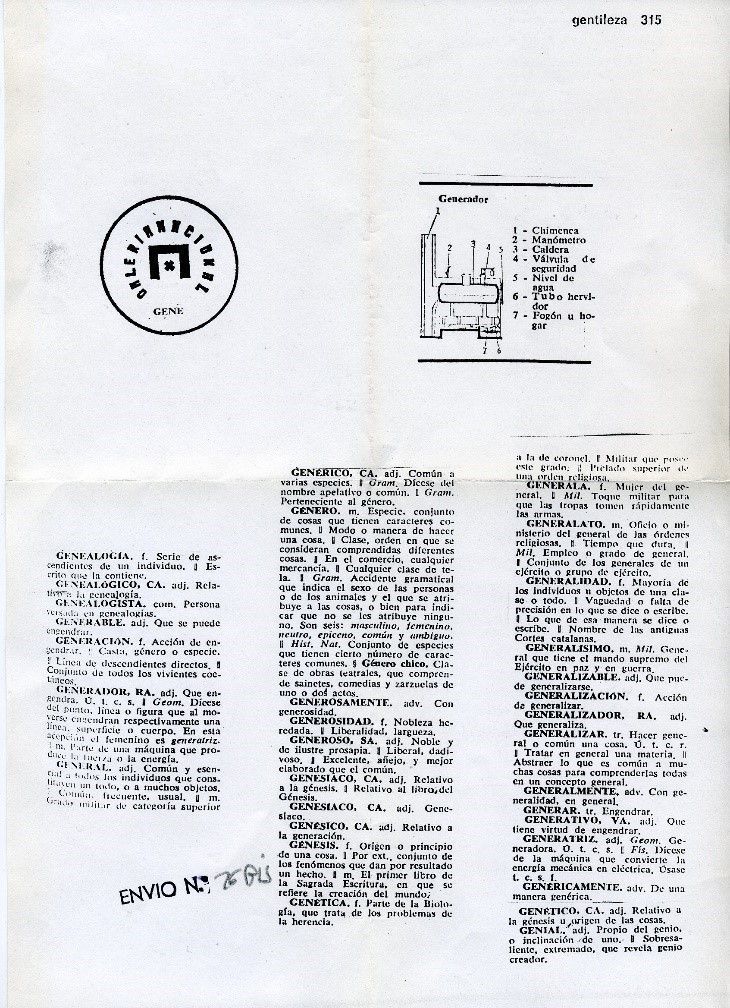 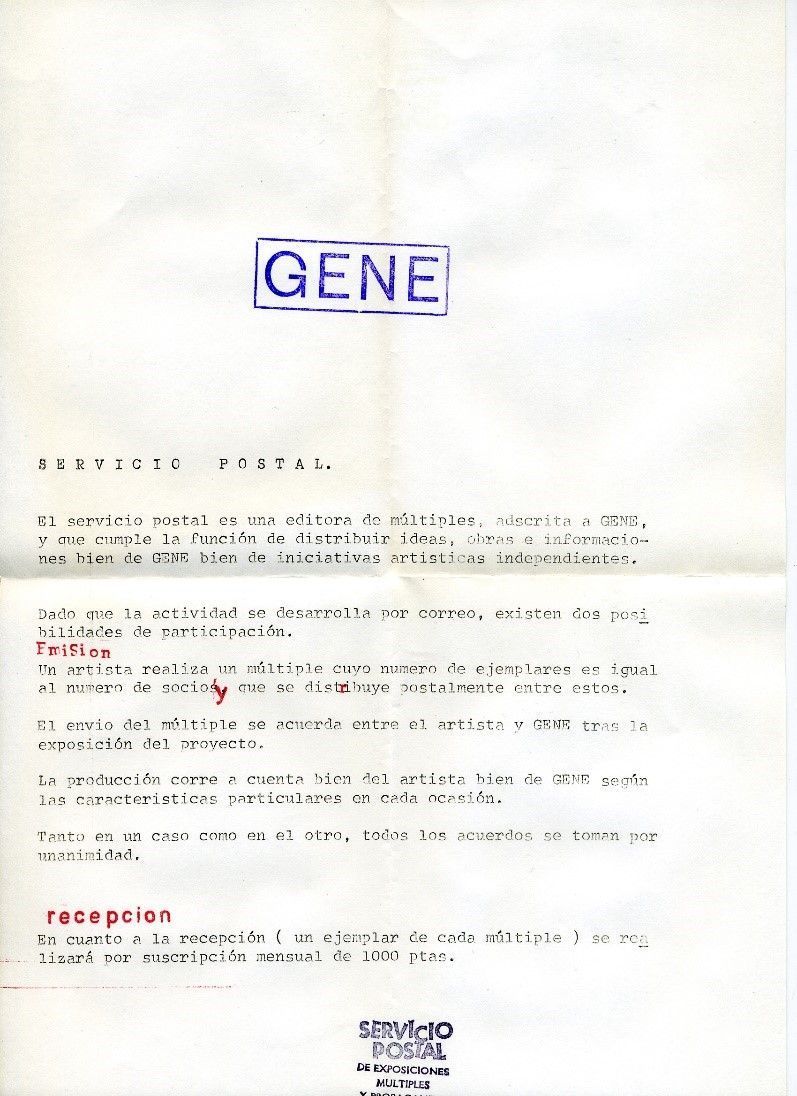 A description of the Servicio Postal already within GENE. 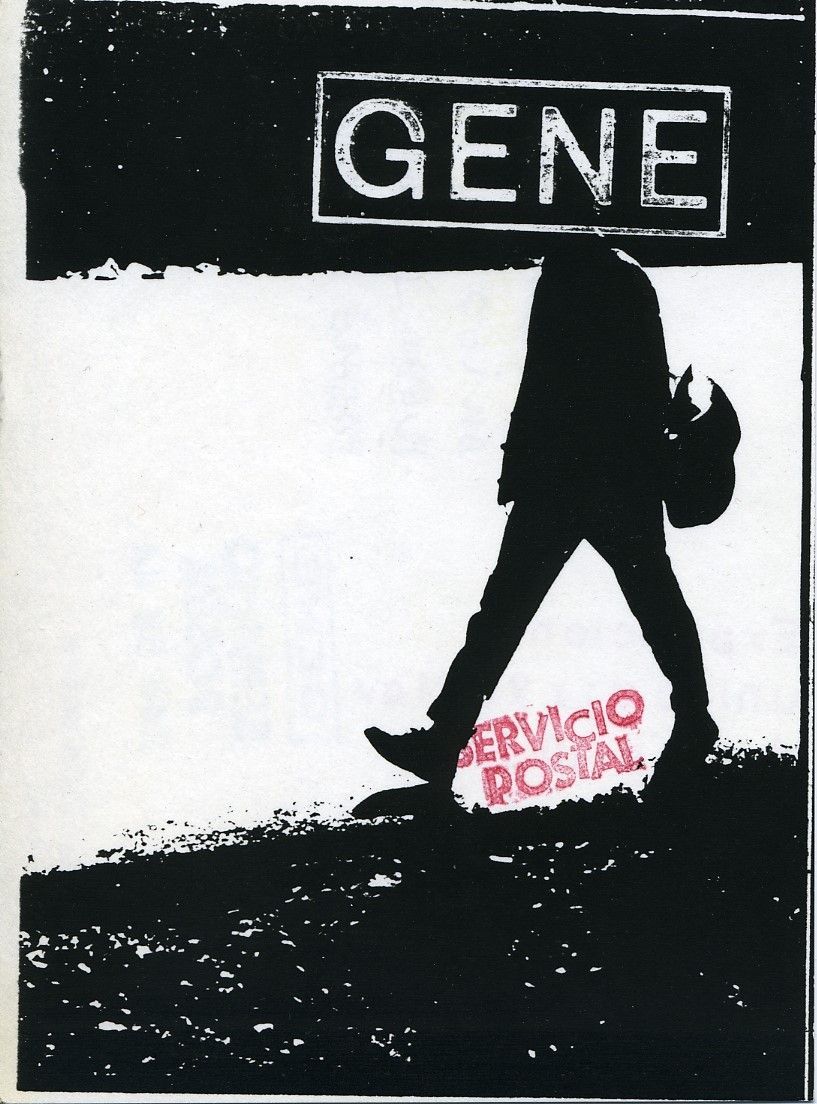 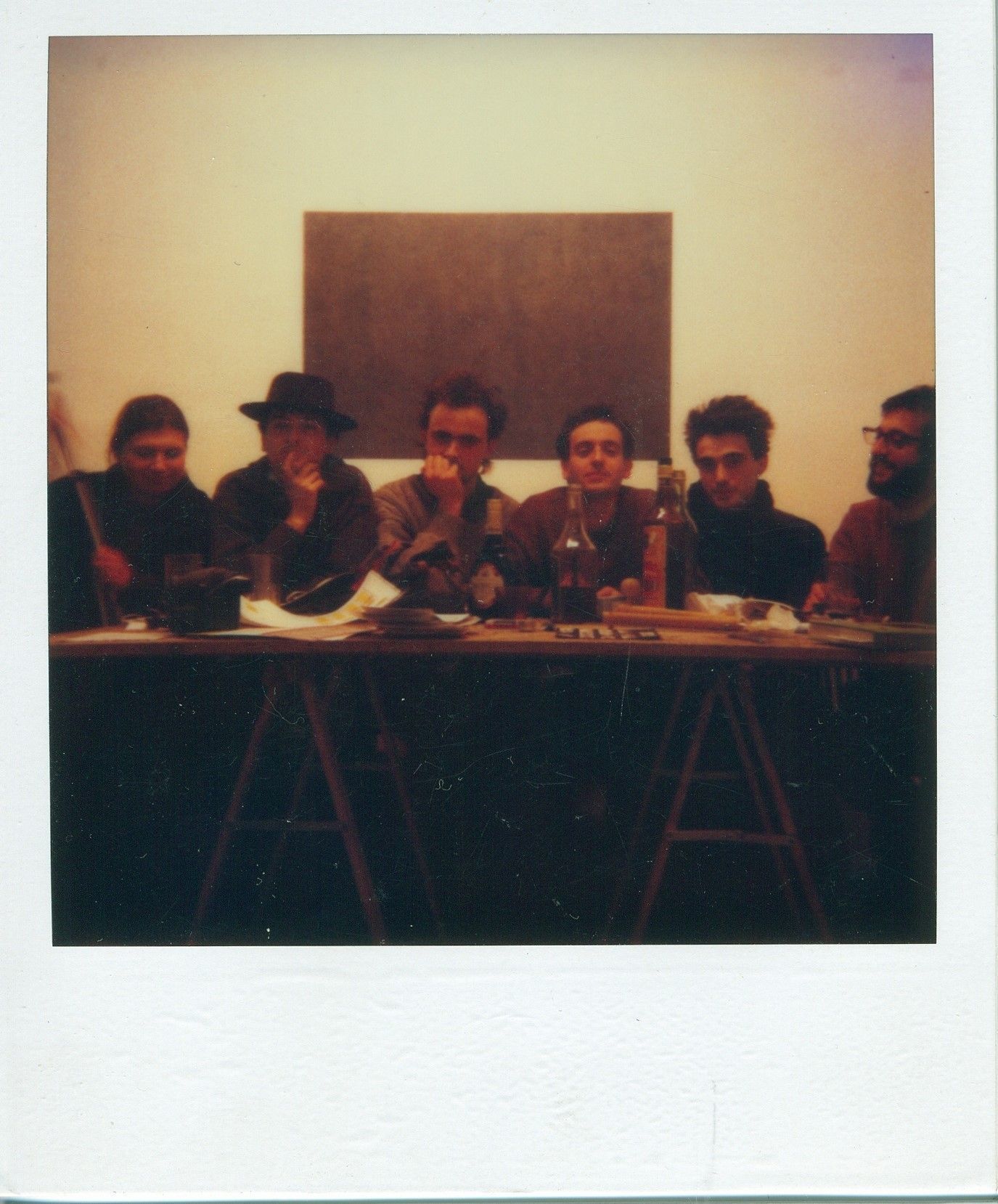 There were other occasional members of the group, as José Díaz Cuyás, Pamen Pereira, or Celia Martín. 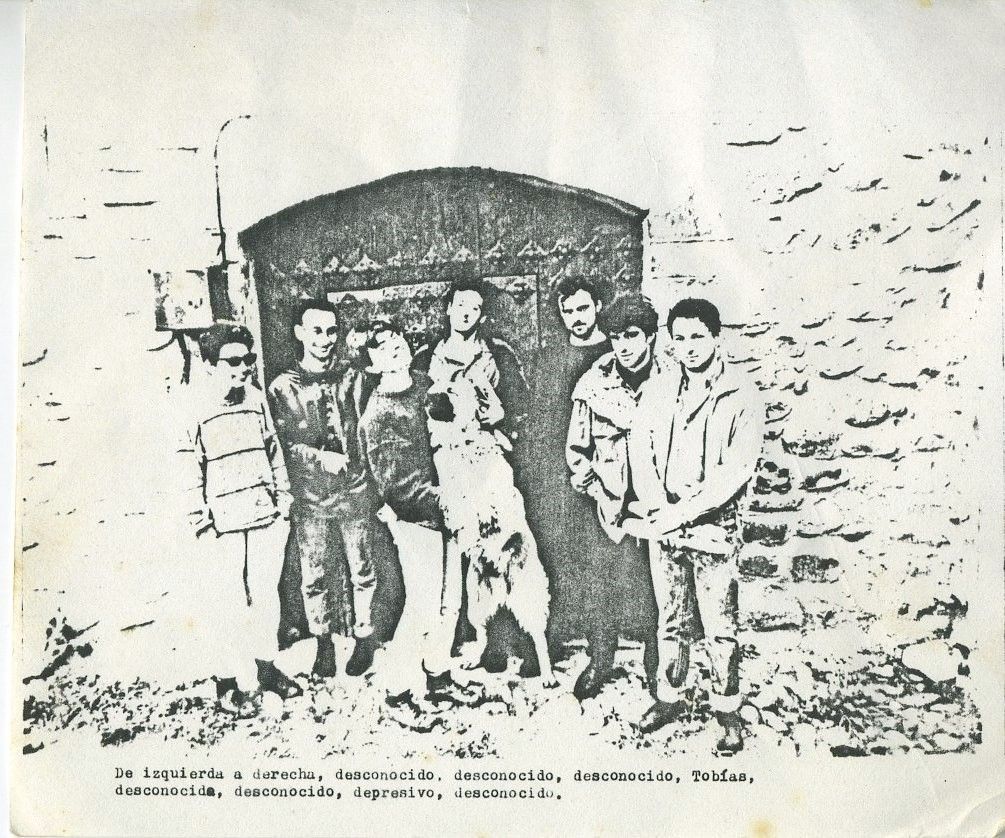 A picture of a field trip of the group. 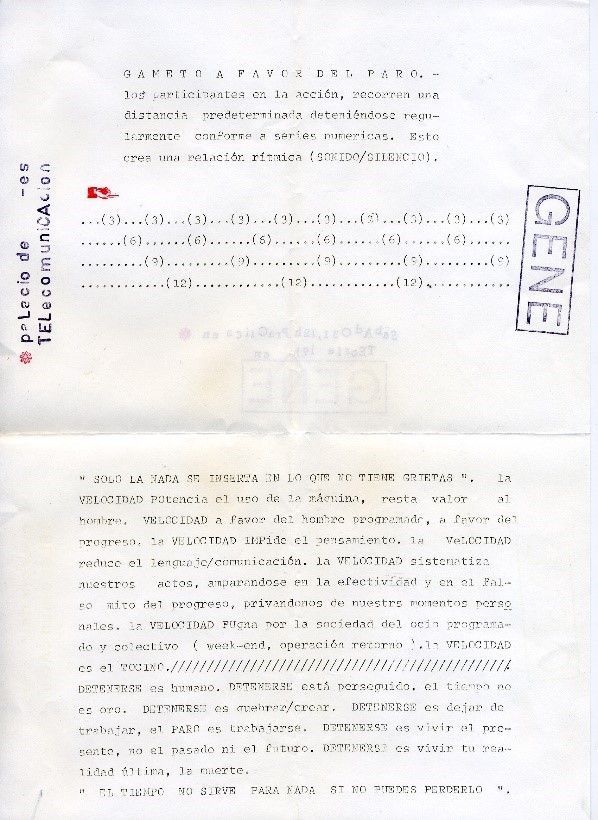 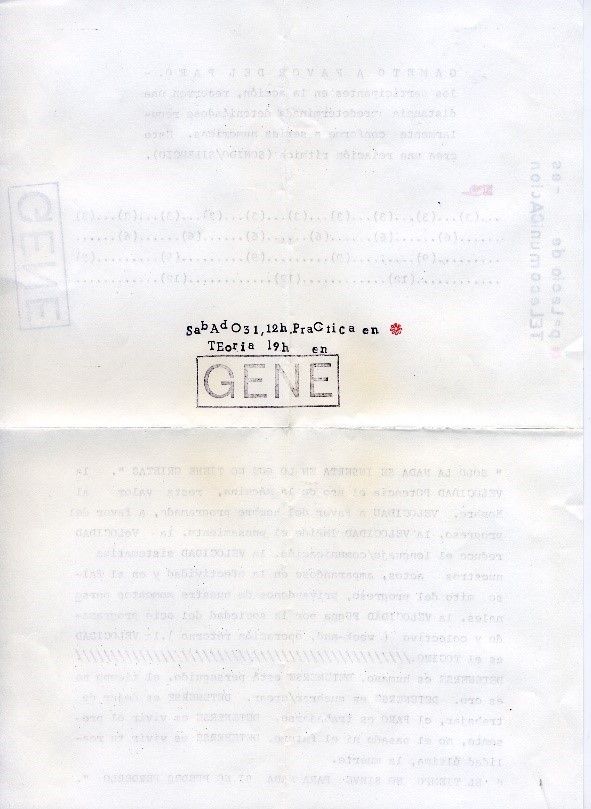 The actions of the group were called 'Gametes'. This is the description and invitation to one of them, called 'Gameto in Favour of the Stoppage' that doubles in Spanish as 'Gameto in Favour of the Unemployment'. We crossed Madrid from east to west walking a certain number of steps, a different number each participant, and stopping for the same number of seconds. We could stop in the middle of the road, or anywhere. Several people stopped in different spots of the streets make a strange secret choreography. 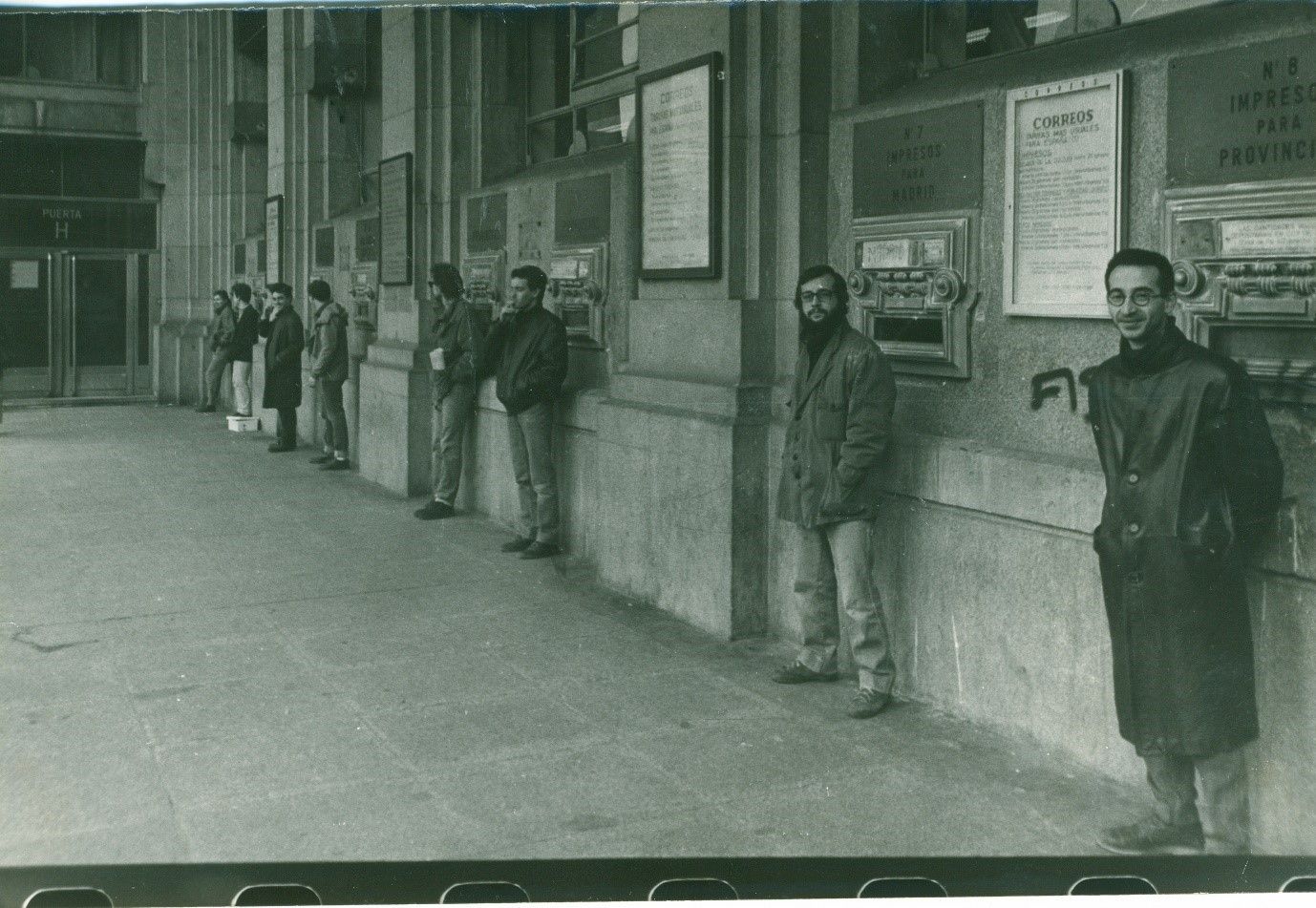 Here we are about to leave the starting point to perform ‘Gameto in Favour of the Stoppage’.

This was an action by Julio Jara called “Journey Third World” in which he walked from Talavera de la Reina to the location of GENE, some 125 kilometres. Some of the members of the group and public in general were joining him as he approached the gallery. 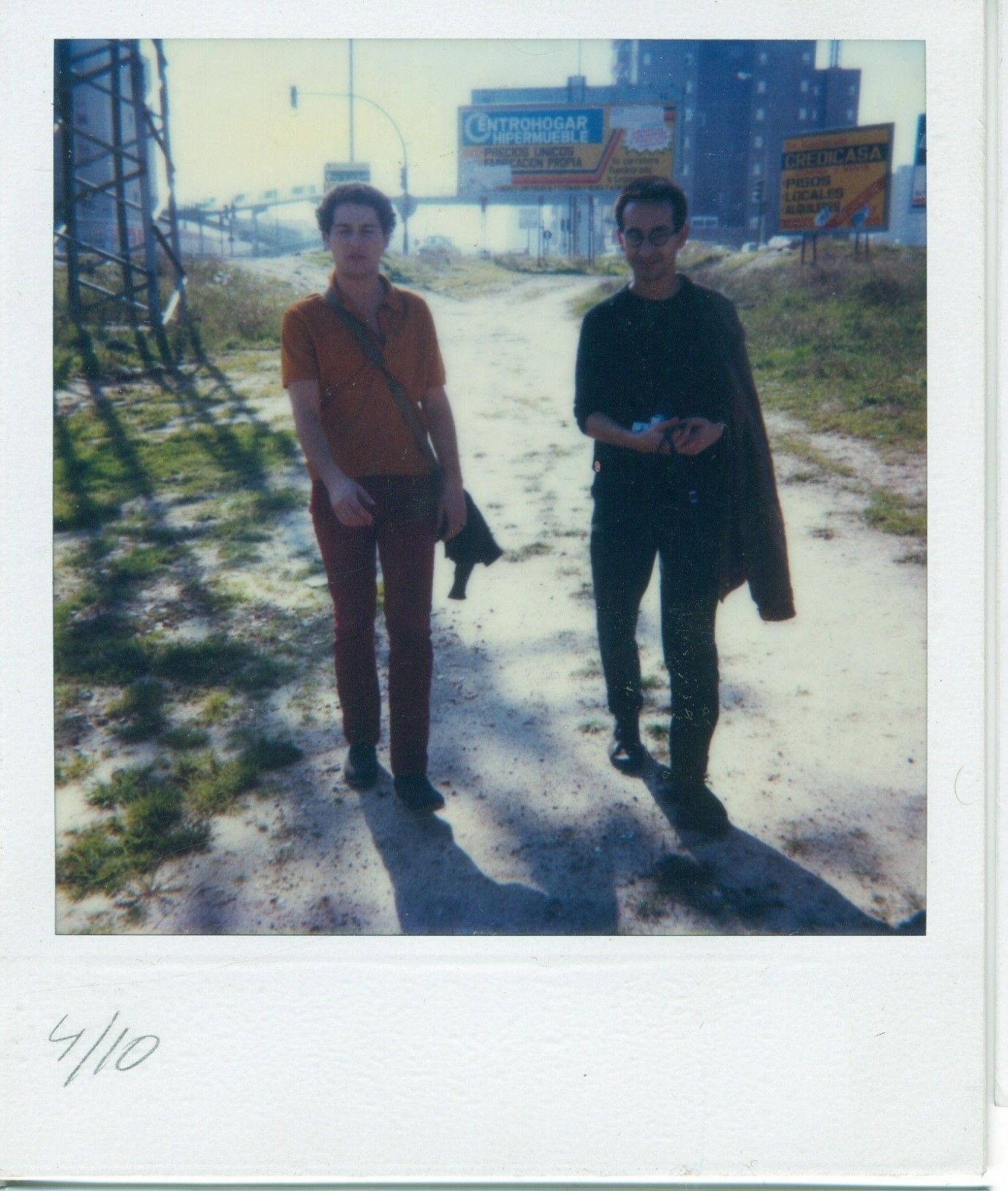 Julio Jara and Pedro Roldán during the action. 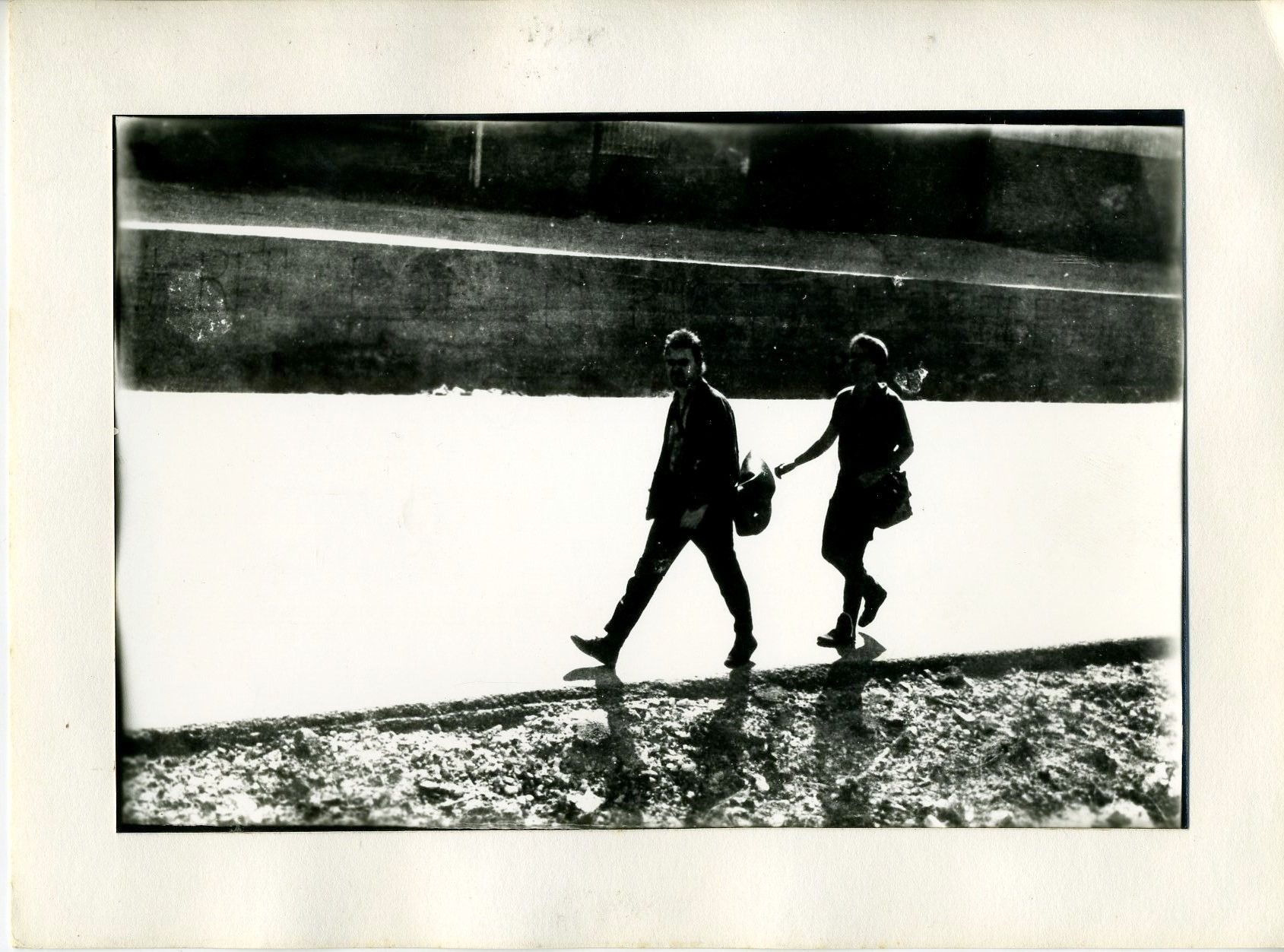 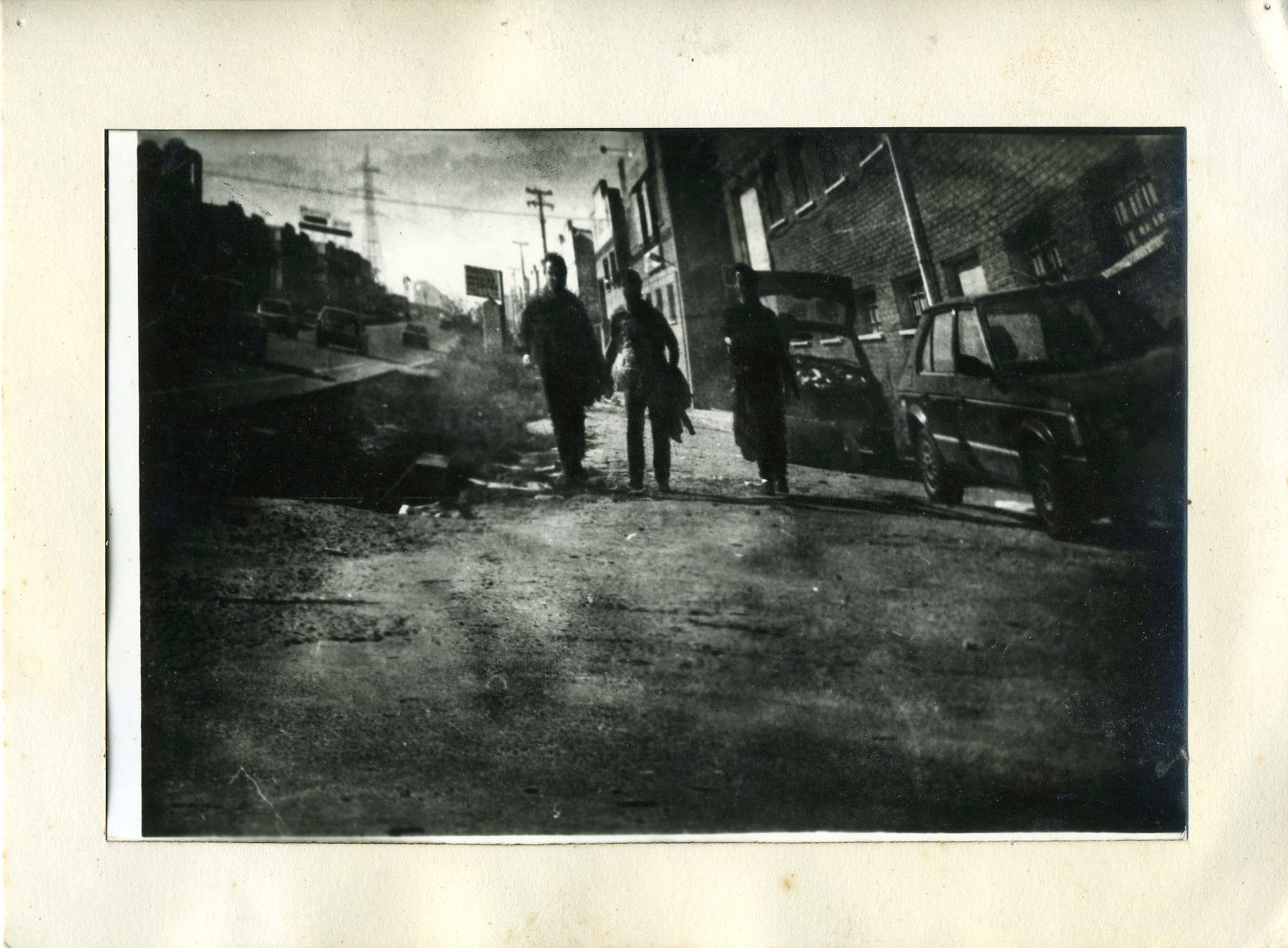 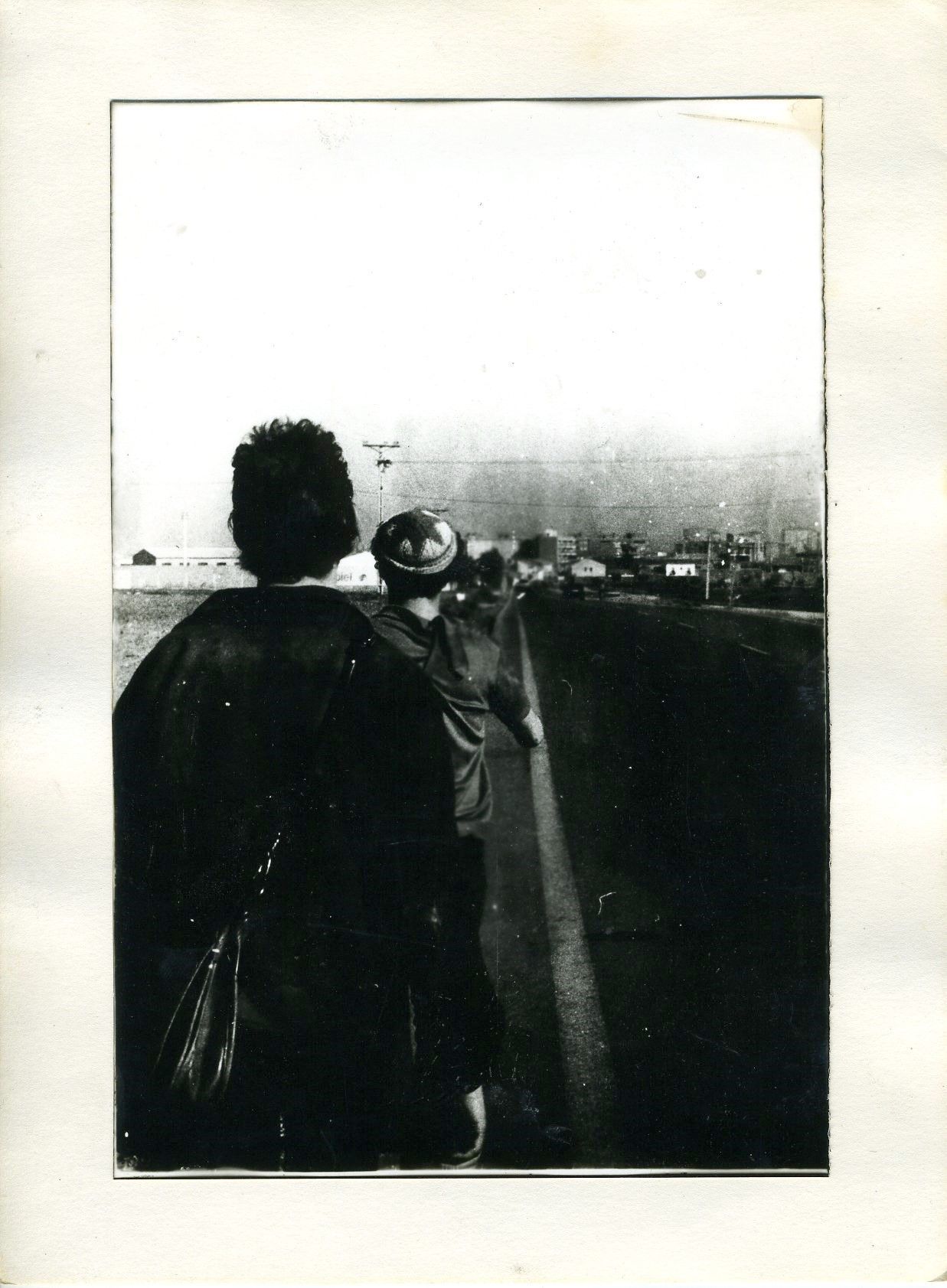 Different pictures taken during the action by Pedro Roldán. 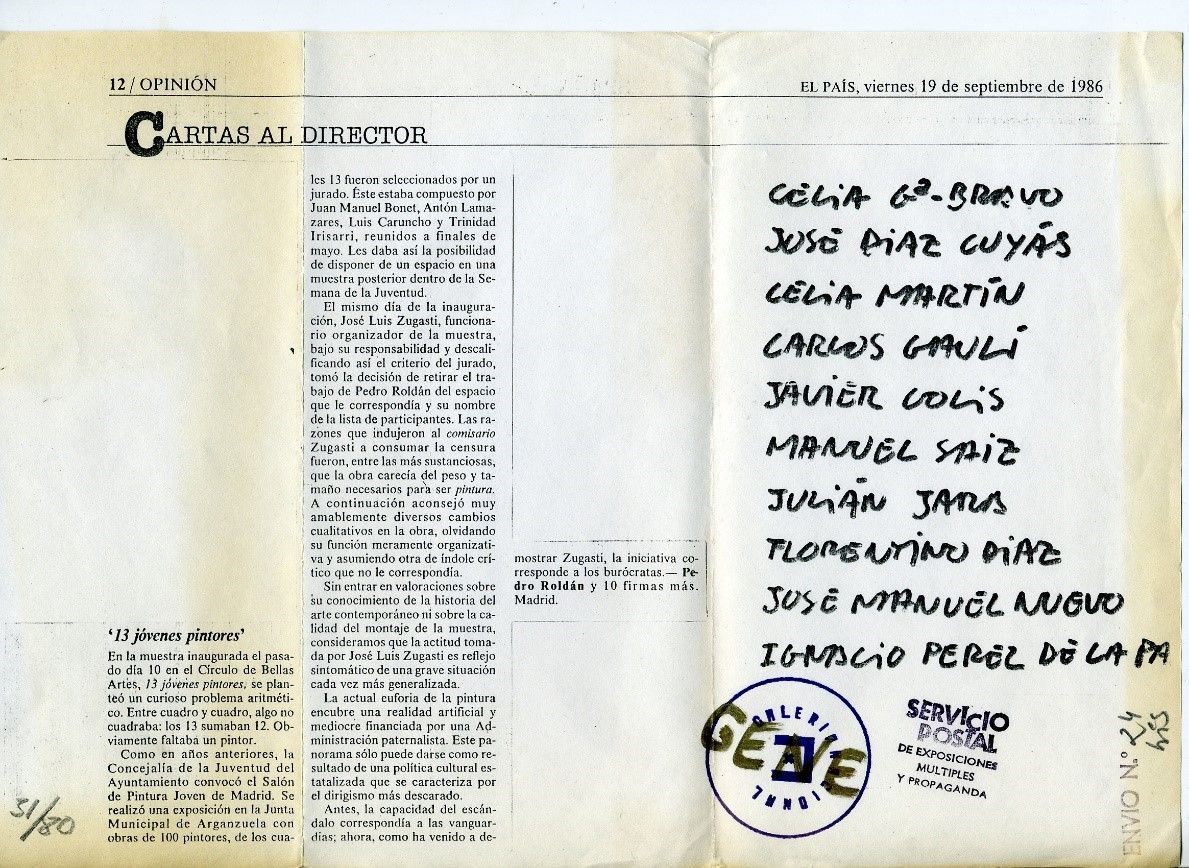 A witty letter of protest, published by El País newspaper, for the refusal of the director of a public gallery to show one of the works of Pedro Roldán. 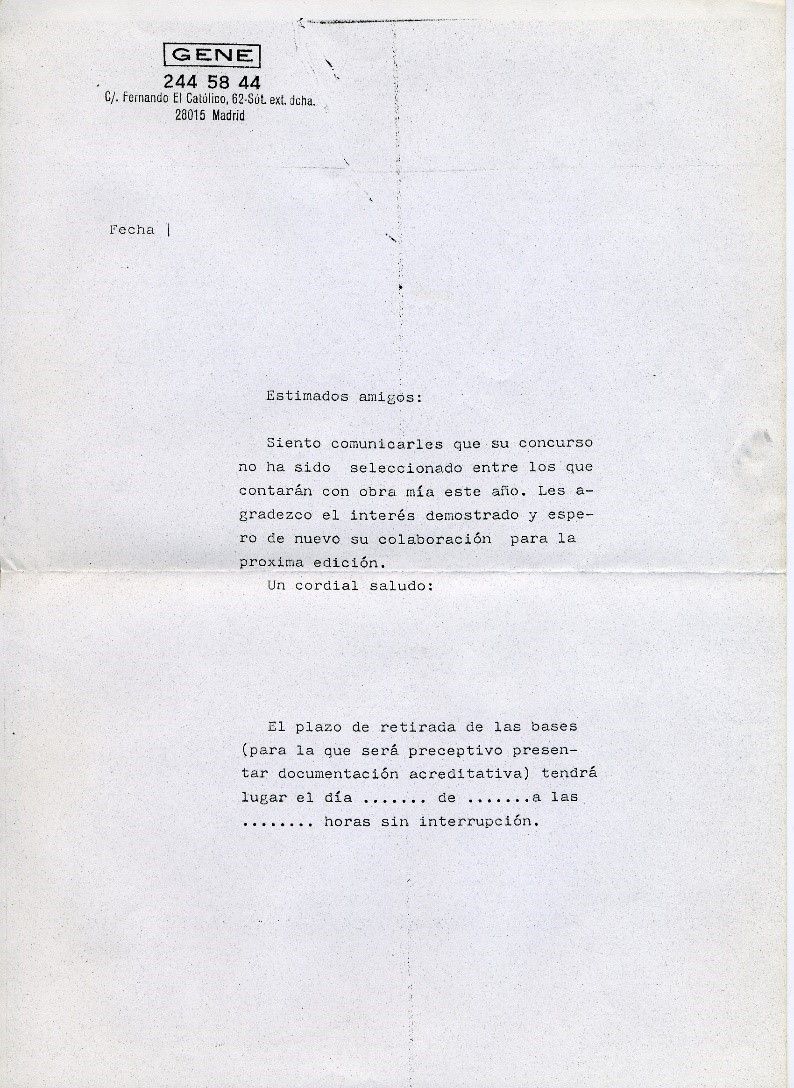 GENE sent regularly this rejection letter to all the calls that were asking for works of artists. We were rejecting to present our work to them. 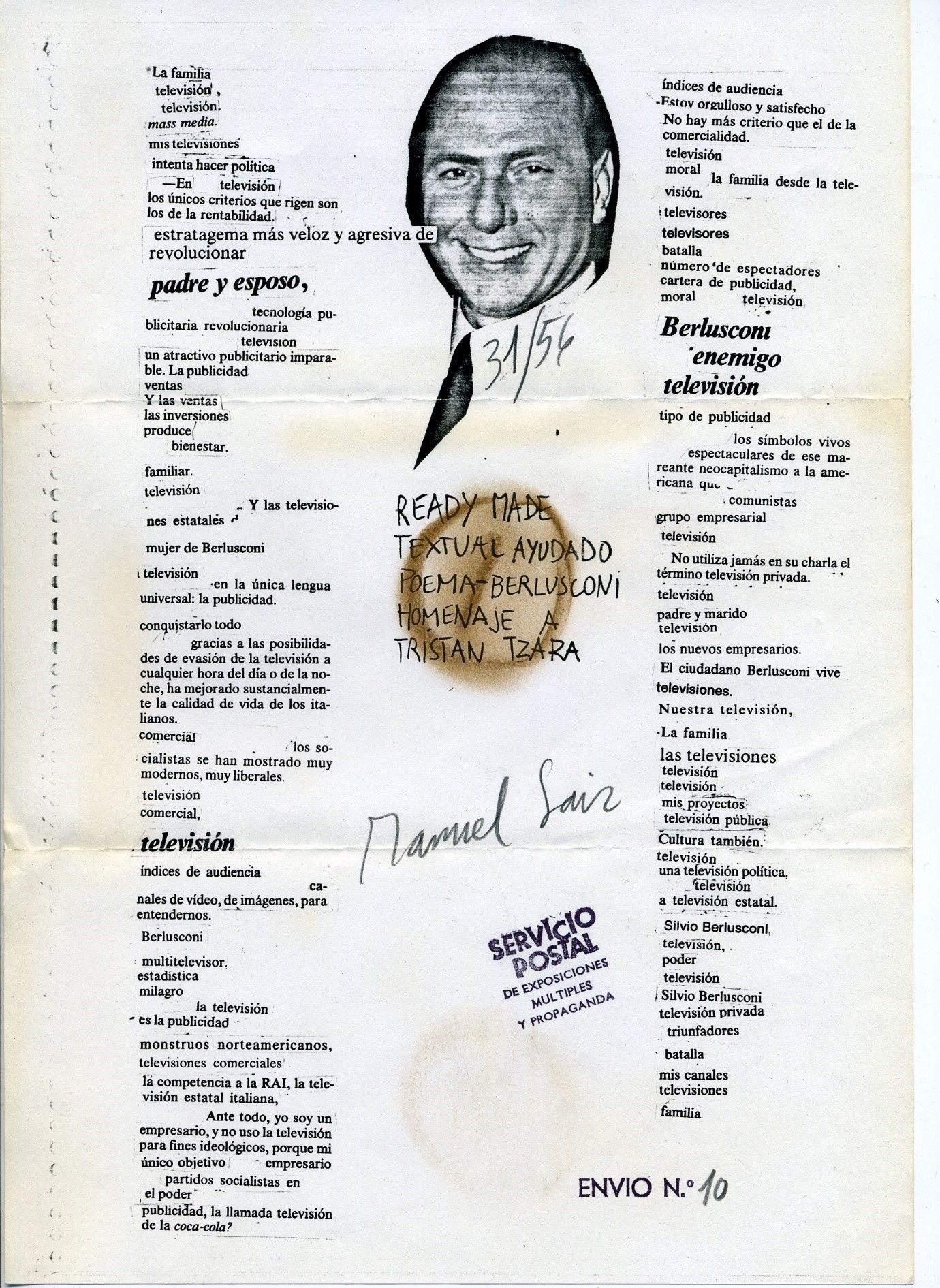 A Sevicio Postal message about Berlusconi, already an infamous figure at the time.

Some of the Postal Service messages, among many: 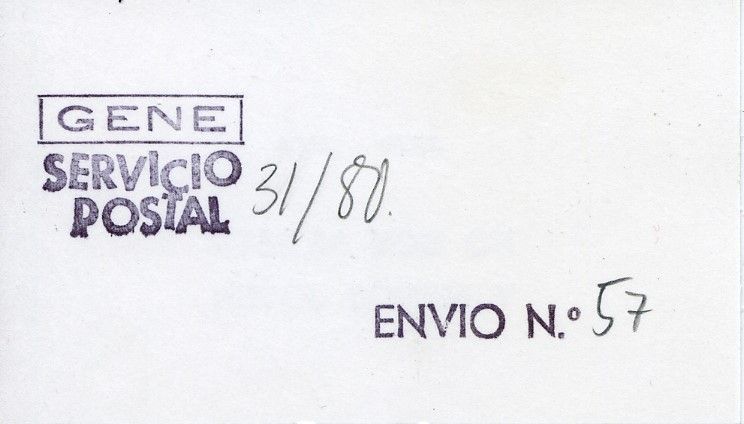 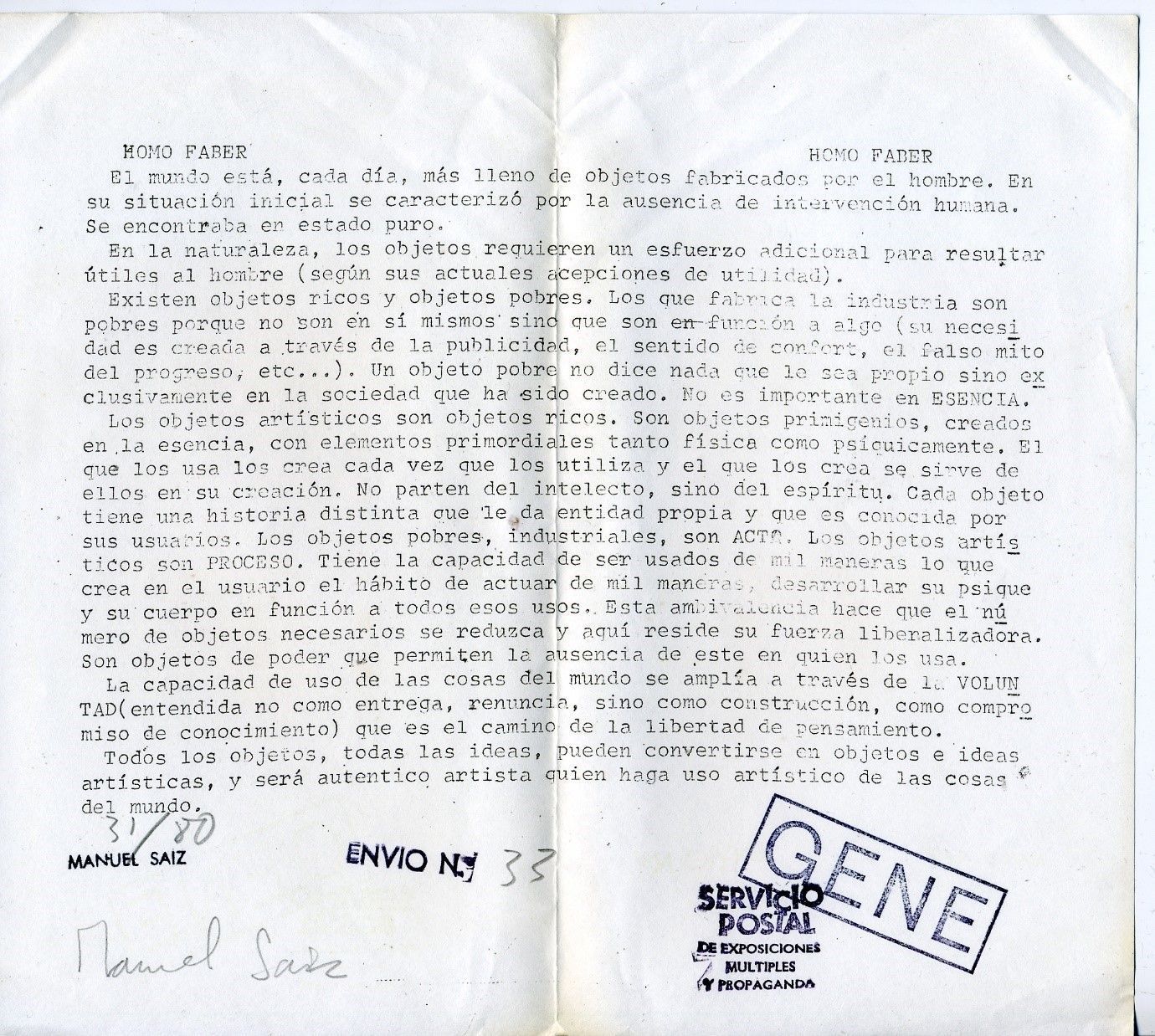 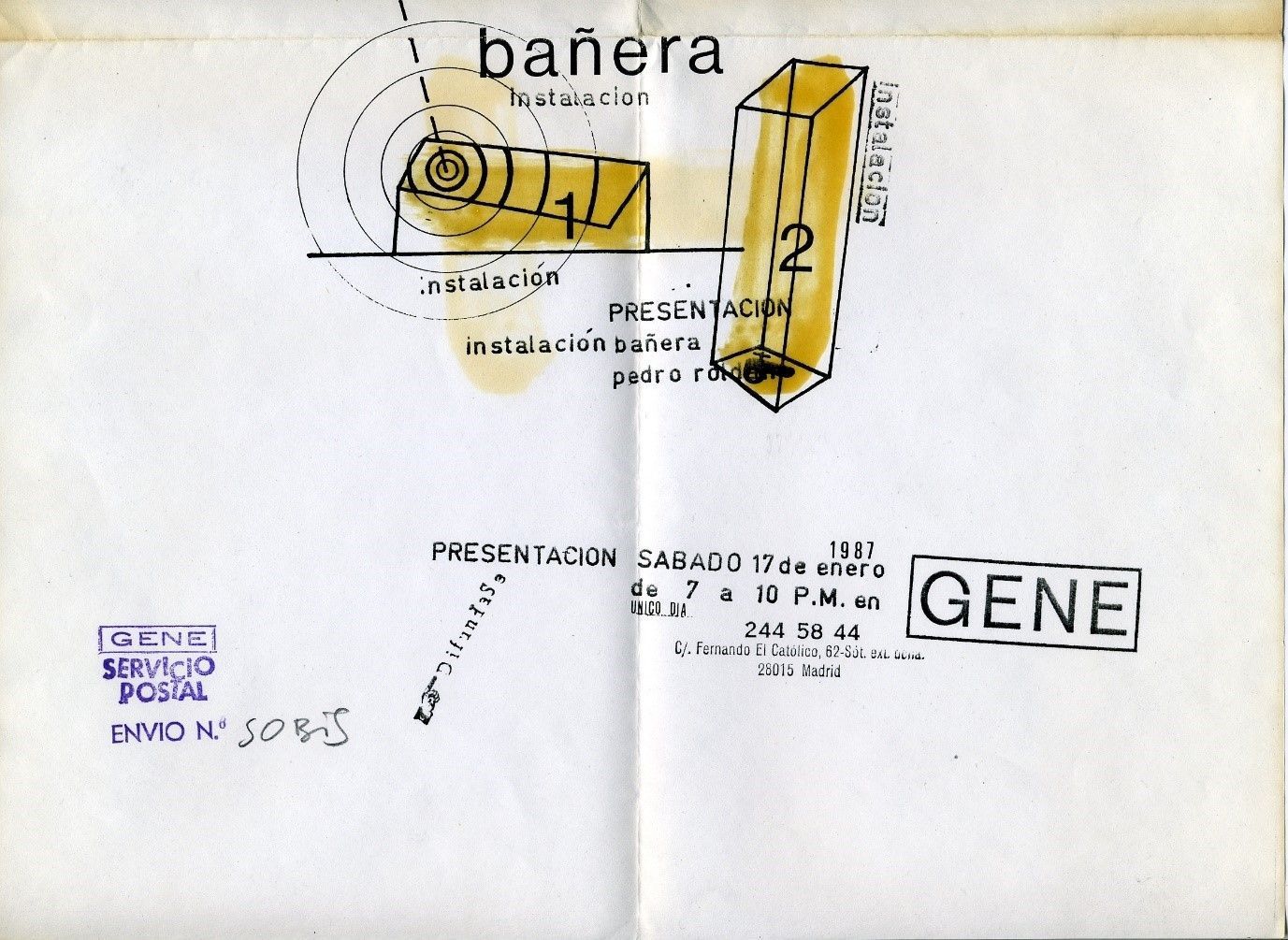