An exhibition of works by five Spanish artists curated by Jorge Bravo and Manuel Saiz.

Artists in the show:

Surplus is profit, an excess earned by a work. Once the necessities of the representation are covered, the elements that constitute the works, physical materials or conceptual devices, they continue producing meaning by an inertial impulse. The additional wealth created in this way is the constitutional supplement of the work of art. The autonomy with which this production, liberated from the obligations of necessity, is faced, is what makes the works of art unpredictable and takes them to the edge of the disaster.

The selected works represent objects, situations and images that belong to the domain of everyday experience and to those which a small alteration takes to another distinct place of perception. This is already a classic theme in contemporary art, but the works which are presented here belong to an immediate way of understanding artistic labour in which the problem of reality-fiction isn’t raised: every one of these works represents an ‘increment of reality’.

The works overdubs reality (in the sense of cinematic overdubbing too), for its contemplation in another universe of language. The sounds, the projected images and the printed images are doubled, they overlap their references, but the superficial element that they constitute is found in another dimension. It is this interruption of the strict sense of the representation that creates the supplement/surplus and not the redundant, necessary function.

We would say that this rupture is produced in the feedback of reality and its representations and these works, as finely tuned devices, they have got to close the loop that makes the mechanism work endlessly and it is here where the crisis of one dimension throws us into another. 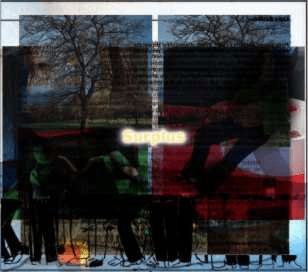