The Universal Denunciation of Human Privileges

THE UNIVERSAL DENUNCIATION OF Human Privileges

WHEREAS the cult of pride and the imposition of privileges by members of the human family are the origin of injustices, conflicts and pillaging in the world,
WHEREAS the desire to establish and maintain human privileges has resulted in barbarous acts which have outraged the natural balance, and bearing in mind that the desire to live at any cost has been proclaimed as the highest aspiration of the common people,
WHEREAS it is essential for human privileges to be exposed and distinguished from what might be considered as rights, so that human beings are not driven to plunder at the least opportunity all those considered to be inferior and less-deserving than themselves,
WHEREAS it is also essential to abolish attitudes of nationalistic vanity in the people,
WHEREAS the peoples of the dominant nations have always reaffirmed their faith in their privileges gained through tradition, historical pillaging and, in recent times, through economic coercion and the use of their armed forces, and are determined to maintain things this way for as long as possible,
WHEREAS some judicious individuals, resisting the forces that personally or in group form act against them, have pledged themselves to making a public denunciation of the fact that the belief that human beings have rights and that having rights is a positive thing is a flagrant lie, and
WHEREAS a common understanding of the functioning of these privileges and false beliefs is of the greatest importance to their repeal and to putting an end to the terrible effects they have on nature, on people and societies,
NOW, THEREFORE,
this present UNIVERSAL DENUNCIATION OF HUMAN PRIVILEGES is proclaimed as a common ideal for which all individuals, peoples and nations must strive, to the end that both individuals and institutions, being constantly inspired by it, promote, through teaching and education, respect for people and nature and ensure, by progressive measures, national and international, the abolition of the idea that humans have rights and that pride in them is justified, everywhere in the world.

ARTICLE 1
-All human beings will die and to some extent are always aware of this fact.

ARTICLE 2
-Everyone to some extent believes falsely to be more than what they are, without distinction of any kind, such as race, colour, sex, language, religion, political or other opinion, national or social origin, economic position, birth or other status. Furthermore, all people always believe themselves to be better than others and consider the human to be essentially superior to the non-human.

ARTICLE 3
-Everyone is permanently in a position to lose their life, to be enslaved, or to suffer an accident that damages their physical and mental integrity.

ARTICLE 4
-Everyone is affected by power dynamics, consciously or unconsciously, as either victim or perpetrator.

ARTICLE 5
-Torture is inseparable from the body and all human beings, to some extent, will suffer the degradation of torture as long as they have a body.

ARTICLE 6
-Everyone is expendable and can be replaced, in any activity, institution or symbolic order, by anyone else.

ARTICLE 7
-The law is a human invention and is subject to all of the adaptations and manipulations suffered by the concept of being "human" and of "fairness" in different times, societies and realities. Thus, discrimination always exists, whether regarding individuals from other times or those from other places.

ARTICLE 8
-Any search for justice, if pressed sufficiently, ends in an irreducible paradox in which injustice is the victor.

ARTICLE 9
-All detentions, imprisonments or exiles are arbitrary, as too are all granting of rights.

ARTICLE 10
-It is not possible for an independent and impartial tribunal to exist, given that all tribunals are constituted from a particular view of reality, which, though it may include a large number of individuals, will always leave out other realities. Thus, there will always be people whose voices will be heard, when heard, in a condition of inferiority in respect to others who belong to the conception of reality held by the majority.

ARTICLE 11
-To live implies alienation. A point of view always exists from which everyone is guilty, given that everyone must accept contracts to procure the means of subsistence and contracts are always against a third party.

ARTICLE 12
-No one can feel secure about their family situation, the inviolability of their home, their correspondence or their privacy. Nor can honour and reputation be protected against the totality of possible attacks, given that their stability is linked to changes in the balance of power and the interests of the communications media.

ARTICLE 13
-1. Everyone will circulate on routes marked by the state and by the reigning economic system and will establish their residence, when they are able to have one, in the places assigned to them, or which natural or human accidents permit.
-2. Everyone leaves or returns to their country, when they have one, impelled by motives beyond their will and, often, beyond their understanding.

ARTICLE 14
-1. In case of prosecution, anyone will receive asylum only when it is possible and convenient for a country to grant it to them.
-2. Motives of any kind can be constantly used to deny asylum or to revoke it.

ARTICLE 15
-1. Everyone is required to have a nationality, to form part of a group whose origins and reason for being are more than likely accidental.
-2. Belonging to a group and the certification of such a belonging will be constantly required of people by states and economic classes.

ARTICLE 16
-1. Men and women of full age are required to regularize and provide an account of their personal relationships through the institutions of marriage and the family.
-2. States will promote marriage and procreation by all the means available to them in order to increase their human potential over nature and other states.
-3. The family is the fundamental group unit of the state and for this reason is protected at all costs, occasionally against the desires and understanding of its members.

ARTICLE 17
-1. Everyone needs to possess things to ensure their subsistence. The things they possess need to be constantly renewed.
-2. The property of some is always acquired by depriving others of it.

ARTICLE 18
-Everyone is born belonging to a sphere of thought, conscience and religion from which they have not had the option of removing themselves; when, over the course of their life, they change their religion or belief, they often do so forced by circumstances outside of themselves and which oblige them to publicly manifest their religion or belief, individually and collectively, both in public and in private, through teaching, practice, worship and observance imposed on them explicitly or implicitly.

ARTICLE 19
-Everyone must learn which opinions are suitable to impart and which feelings to express; this obligation includes learning to say things that do not bother anyone and to impart opinions that cannot incriminate those who hold them. The dissemination of these, like any other opinion or thought, remains at the discretion of the communications media, corporate interests, the laws of each country and whatever stands as censorship and has the necessary repressive means.

ARTICLE 20
-1. Everyone is compelled to assemble and associate with others, in order to subsist, even if no group or assembly exists to their liking.
-2. There are few specific associations to which people are compelled to belong, but it is obligatory to belong to these and various of the optional ones are strictly demanded.

ARTICLE 21
-1. Everyone is compelled to support the government of their country, through the coercion of supposedly democratic practices or through the actions of the state's repressive forces.
-2. The state uses within its structure all types of people who can be called upon at any moment to fulfil their duty to their country's public services.
-3. The will of the people, that is, the authority of public power expressed in elections, is always susceptible to manipulation by propagandistic, scientific and economic means against which the members of the public are defenceless and, in most cases, of which they are also ignorant.

ARTICLE 22
-The economic and social security of each individual is impossible to guarantee, even when states or communities have an interest in and the intention of doing so. This is because all of the parameters of that security are conditional and because the security and dignity of some commonly exist at the expense of others.

ARTICLE 23
-1. Everyone is on their own in the search for the means to subsist and must accept any form of work if the conditions in which they find themselves and their primary needs so demand it.
-2. Higher skilled people with fewer moral qualms obtain less demanding work and higher salaries.
-3. Pay for work realized depends on the law of supply and demand, and thus in many instances does not cover the primary needs of the person who works.
-4. Those who form and/or join trade unions must deal with the consequences.

ARTICLE 24
-All rest is granted solely to allow for the recuperation of strength for more efficient later work and must end the moment in which it no longer fulfils this purpose. All free time is used to carry out subsidiary tasks of the production system without pay.

ARTICLE 25
-1. The needs of the people can never be entirely fulfilled, because the concept of what is necessary is always being dynamically redefined. The people, therefore, are always subject to the urgency of resolving needs they consider essential.
-2. Motherhood and childhood have greater demands in terms of their being considered as necessities.

ARTICLE 26
-1. Everyone must learn skills by way of which they can position themselves economically and socially above others.
-2. Education, as much in institutions dedicated specifically to it, as in the family or the communications media, is orientated toward indoctrinating individuals in order to improve the functioning of economic and political systems. Individuals cannot remove themselves from this indoctrination without becoming economically marginalized and losing the means of subsistence.
-3. Parents, within the possibilities of indoctrination, will choose for their children the education that most satisfies their unconscious psychological needs.

ARTICLE 27
-1. Everyone must participate in the dominant culture, or risk being marginalized and scorned.
-2. There is no real possibility of authorship, and the products of people's minds are always amalgams of the thinking of others, to which an author is led by impulses that are often beyond his or her will and/or understanding.

ARTICLE 28
-Every country, and thus every individual belonging to a country, is subject to the designs of the government of the strongest country, which applies pressure through political, economic, diplomatic or military means to achieve advantages for the state of that country and not necessarily for the people who form it. It is the intention of this denunciation to refer here to each and every country and individual.

ARTICLE 29
-1. Everyone has duties to the community.
-2. Everyone is subject to the limitations as established by law.
-3. No rights or freedoms exist except within contexts in which rights and freedoms are restricted and, in any case, are always at the expense of others.

ARTICLE 30
-Nothing in this Denunciation may be interpreted in such a way as to serve any state, group, or person to engage in and develop any activity or perform any act that tends toward improving the world, increasing personal pride or exalting feelings of kindness and humanity. 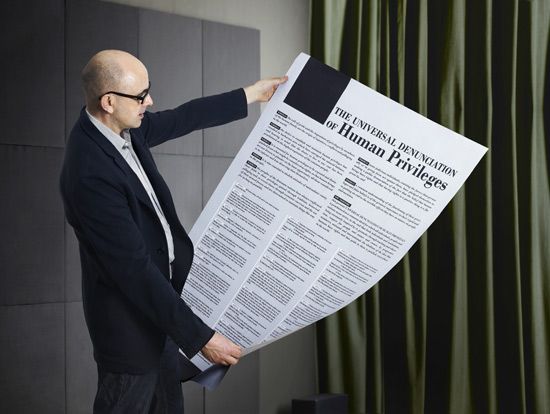